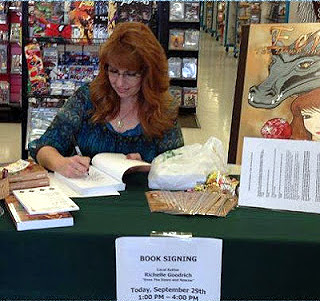 Hi there!
For those of you who don't know me, I am American novelist and poet, Richelle E. Goodrich. My business is writing and illustrating young adult books that are full of intrigue and imagination. I focus on creating stories and sagas appropriate for all ages, wild adventures in which anyone can get lost.

A native of Washington State, I graduated from Eastern Washington University with a BA degree in Liberal Studies and a second BAEd degree in natural sciences/ mathematics. My numerous book quotes have been published in books, magazines, and on social media. This includes eight separate Chicken Soup for the Soul books, a Revlon ad campaign, on the opening scene of a tv episode of Alone, and in an Oxford philosophy textbook.

I love the arts—drama, choir, sketching, painting—but my greatest love is writing.

"I like bubbles in everything. I respect the power of silence. In cold or warm weather I favor a mug of hot cocoa. I admire cats—their autonomy, grace, and mystery. I awe at the fiery colors in a sunset. I believe in deity. I hear most often with my eyes, and I will trust a facial expression before any accompanying comment. I invent rules, words, adventures, and imaginary friends. I pretend something wonderful every day. I will never quit pretending." —Richelle E. Goodrich


Experience a novel by Richelle E. Goodrich.
The Tarishe Curse is a thrilling piece of fiction from the Queen of Werefolk's point of view. It is difficult enough for Duvalla and Kresh to protect their young family in a world of Hallows Eve creatures, but this feat proves near impossible when an old witch bent on vengeance against the werewolves casts a Tarishe curse that manipulates both heart and mind. The battle is not only with a sword but an internal struggle--a fight to love the ones that Duvalla has sworn under a spell to hate, and to hate the one who through evil enchantment manipulates her heart.

Dandelions: The Disappearance of Annabelle Fancher is a suspenseful, human-interest account detailing the harsh reality endured by young Annabelle Fancher. It tenderly acquaints the reader with a lonely young girl and shares her courage facing adversity. Many of Annabelle's experiences were taken from the lives of actual people.

Secrets of a Noble Key Keeper is an additional book to Dandelions. It is young Miss Annabelle Fancher's original fairy tale, which she wrote for one of her few friends, Mr. Michael Lundstrom. Destined to be a children's classic, this whimsical story is perfect for everyone--young and young at heart.

The Harrowbethian Saga is a six-book series
by Richelle E. Goodrich 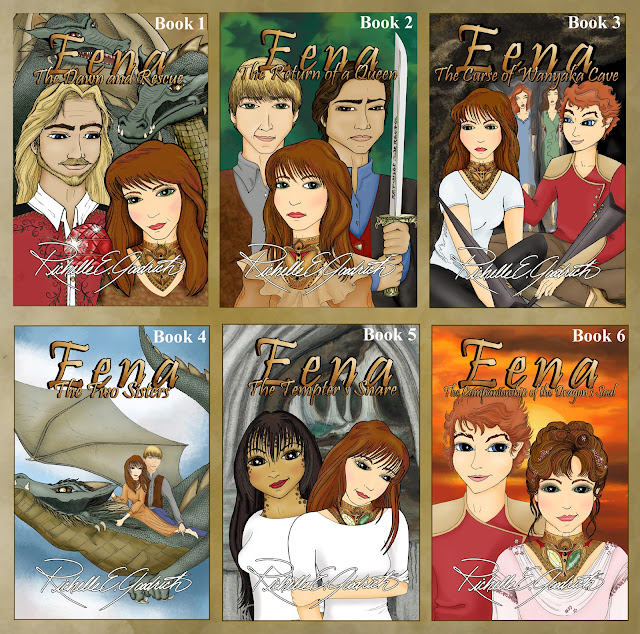 After an unplanned trip to the doctor's office, Sevenah Williams discovers that her ancestry is anything but human. This shocking news puts her on a course to find out the truth about her parents and a tragic past that placed her in hiding at a very young age. Eventually, she takes on her birth name, Eena, and accepts her birthright as the only living heir to the throne of Harrowbeth.

This privilege comes at a price. She learns this truth during the painful process of physically joining with an heirloom necklace known as the dragon's soul. From that point on, Queen Eena slowly uncovers powers granted her by the necklace, giving her the ability to manipulate energy--a gift that comes in handy when facing enemies that wish to see her royal line eliminated.

Eena must fight with new friends at her side including Derian, the captain of the Kemeniroc; Kira, a Mishmorat possessing might and spunk; Shanks and his crew of giant Viiduns; and Ian, her best friend and sworn protector. Her greatest challenges, however, turn out to be personal: learning to love, to trust, and to handle adult problems as a teenager.

Book I - Eena, The Dawn and Rescue

Sevenah Williams lives a quiet farm life until she stumbles upon a mysterious past and learns she is heir to the throne of Harrowbeth. She is the last living of royal blood able to don a peculiar and enchanted heirloom necklace. Given the new name, Eena, she sets off for a new home--a world plagued by civil war--only to discover that her enemies and allies are near impossible to distinguish.


Book II - Eena, The Return of a Queen

An enemy at their heels, a dragon stone portending the queen's demise, and an armada prepared to battle against all odds in hopes of altering the future.

Deep within Lacsar Forest inside the black walls of Wanyaka Cave, a childhood ghost story becomes reality. Two evil sisters and their brother, along with a dragon forced to do their bidding, combine efforts to manipulate Queen Eena into freeing them from their eternal prison. And it seems she hasn't the power to resist.

Queen Eena sees her world crumbling, chiefly the lives of those she loves most. She must thwart the evil plans of two devious immortal sisters either by defeating them or doing the inconceivable and joining them.

It is the queen's eighteenth birthday, and all of Moccobatra is eagerly prepared to participate in a world-wide celebration. Within the year, the young queen of Harrowbeth will be married as tradition dictates, but not everyone is happy with her choice of a suitor. Pressures mount and are added upon by disturbing dreams that could possibly change the future of Harrowbeth.


Book VI - Eena, The Companionship of the Dragon's Soul

The young queen of Harrowbeth is determined to set things right, but doing so means breaking a few big rules. Joined by a select group of Harrowbethian militiamen, as well as a handful of Viidun warriors and a few spunky Mishmorat sisters, Queen Eena sets off for Laradine--the home world of the immortals. Things get carried away, plans are drastically altered, and before long Eena starts to wonder how many wrongs it will take to finally set things right.

Click on the links below for a sample of each book.

Posted by Richelle E. Goodrich at 7:58 PM No comments: 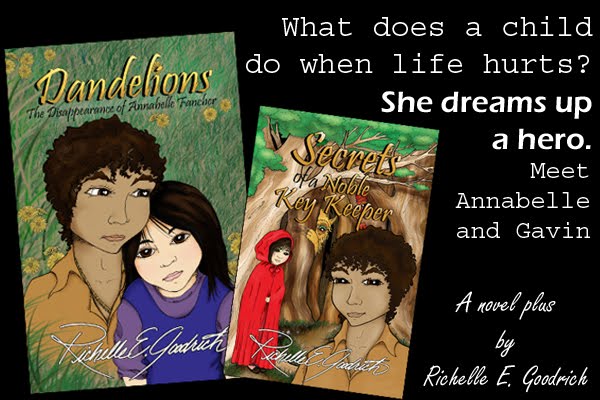 Visit Harrowbeth on the planet...

Richelle E. Goodrich
Native to the Pacific Northwest, I was born in Utah but raised in Washington State. I graduated from Eastern Washington University with bachelor’s degrees in Liberal Studies and Natural Science / Mathematics Education. I love the arts—drama, sketching, painting, literature—and write both poetry and fiction whenever opportunity presents itself. I have described myself in the following quote: “I like bubbles in everything. I respect the power of silence. In cold or warm weather, I favor a mug of hot cocoa. I admire cats—their autonomy, grace, and mystery. I awe at the fiery colors in a sunset. I believe in deity. I hear most often with my eyes, and I will trust a facial expression before any accompanying comment. I invent rules, words, adventures, and imaginary friends. I pretend something wonderful every day. I will never quit pretending.” —Richelle E. Goodrich